posted by admin
247 0 1
Share
‘ They chose “beer as soda pop.” Craft brewers are “beer as wine.” ‘
– Michael Jackson
Food today is quite an imperative part of one’s life. We search for unique, complex flavours & savour every bite… but have you ever thought about the complexity in a glass of beer ?
Just like you take time out to understand what goes on in your meal, take a few minutes to savour the beer you have in hand & we assure you, you will be quite surprised ! With the availability of a number of craft beers at an arm’s length, once you begin to pay more attention you will open your taste buds to a plethora of flavours, styles & choices.
Our recent visit to Brewbot got us to explore quite a few options in Beers, some available exclusively at their outlet. 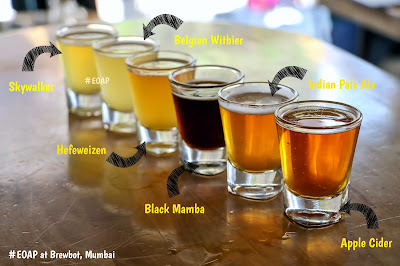 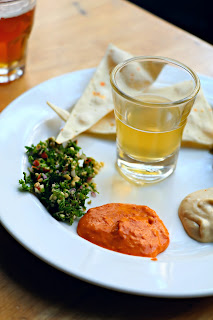 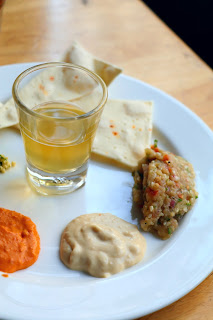 Belgian Witbier ( Botwork Orange )
A light headed beer with a prominent aroma & flavour of Orange, with hints of coriander & wheat. We paired this Beer with a few things from their Sunday Brunch Spread such as Hummus, Baba ganoush, Red Harissa to match its spicy, earthy notes. 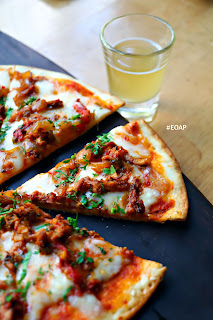 Hefenweizen ( Floating Head )
We like to call this the ‘ Minion Beer ‘ owing to its prominent Banana flavour. With the addition of the spice clove and a blink & miss of bubble gum, this beer is best paired with a Cheesy pizza or Sea Food ( Try the Bacon wrapped Madness ).

Black Mamba
A creamy stout Beer with strong notes of chocolate, coffee & dark raisins. The colour is a dead giveaway of its dark roast. The fact that the beer has notes of chocolate does tend to get many excited hoping for a very sweet taste, however, the beer tilts more towards a dark coffee flavour with hints of bitterness dominating its mild sweetness. This beer is best paired with desserts ( Try Stout & Chocolate Brownie ).

Indian Pale Ale
Despite what the name may suggest, this beer was not made in India. However, this beer was made keeping in mind the Indian climate & travel to India ( History of IPA : https://goo.gl/0zTLRE ). Now the bitter beer you have been warned about is this one. It is incredibly bitter with its taste lingering on the tongue. This bitterness accentuates the spice of a dish. ( Try Red Harissa & Piri Piri Chicken Skewers )

Apple Cider ( Outcider )
One might just confuse this one with an Apple juice at first, but the tartness of the beer is what makes the difference. For those who do not like the bitterness of the beer, this is a perfect fruity treat for you. 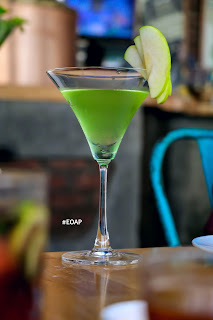 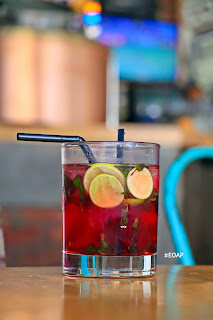 Sour Apple Martini
A sweet & sour treat with a mix of Apple & lime Juice along with Vodka and Cointreau. Do not forget to let the apple slices swim in the drink a bit before biting in.

Red Wedding
A vodka based cocktail with delicious sweet watermelon juice muddled with basil with rosemary floating a top. The freshness of the watermelon is evident in each sip and the rosemary adds a much welcome pineish pungent flavour to the mix.
Peachy
Another vodka based drink which was quite a favourite on the table. Sweet & sour peach syrup muddled with mint, mixed with vodka… a powerful smooth drink. We do suggest adding a wedge of peach, can you imagine biting into a juicy slice doused
with vodka?  *Cravings*
Bam-Boozled Milkshakes & Smoothies 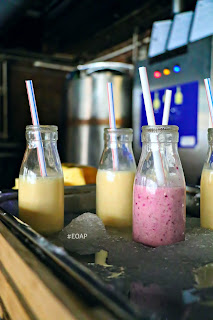 Vodka Marshmallow
A vanilla smoothie with tiny bits of soft marshmallow. Despite having a simple, homey flavour, we couldn’t taste the vodka.

Baileys Chocolate Espresso
We tasted the chocolate, we tasted the espresso but we missed the Baileys. 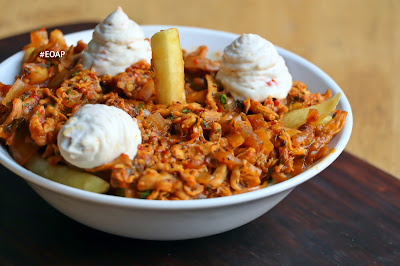 Hangover Disco Fries
Crispy potato fries tucked inside a cheesy moat of beer cheese sauce, roasted bell peppers, grilled onions, shredded chicken marinated in Chipotle with jalapeno sour cream on top. We had to dig deep to find the fries, but we aren’t complaining…this is like
a deliciously cheesy meal full of textures ! A must have. 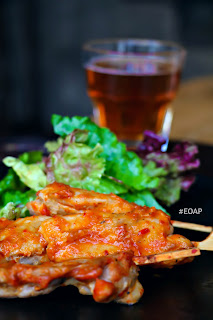 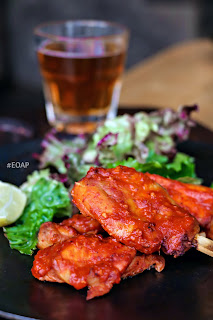 Red Harissa & Piri Piri Chicken Skewers
Served with a side of Loose leaf lettuce, both the skewers were quite similar in taste. Though the chicken was cooked well, we think they could have been a bit more grilled to make them slight dry ( tilting towards being caramelized ) instead of saucy. 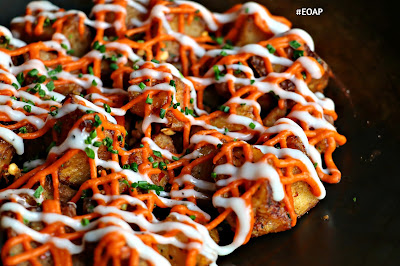 Potato Bravas with lemon + roasted Aioli
Potato cubes which are crisp on the outside & soft, toasty warm on the inside, topped with lemon & roasted Aioli… a party in the mouth ! Not only is this a great appetizer but also great as chakna. 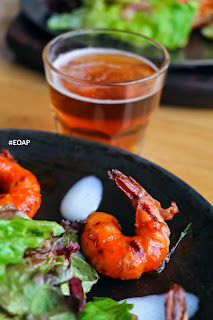 Bacon marinated with spicy sriracha wrapped around juicy prawns topped with a lovely honey glaze… we are drooling while typing ! Should we say more ? 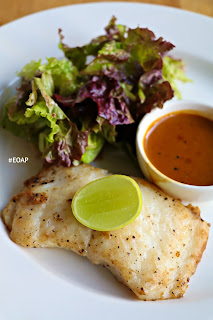 Pan seared Basa Fillet with Soy-Lemon-Butter
The little piece of a Basa fillet kind of sunk our heart in terms of quantity, but they didn’t compromise on the quality. The lightly sautéed fillet was accompanied with Loose leaf lettuce and a delicious soy-lemon-butter sauce that was the highlight of our afternoon. The rich sauce had a delicious salty-lemony flavour which we just couldn’t get enough of. 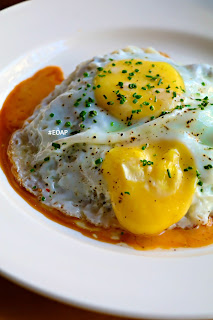 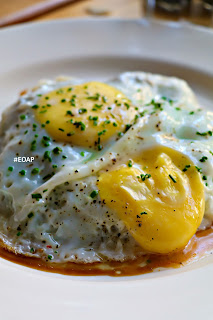 Grilled Steak with Sautéed Mushrooms, Jus, Hollandaise Sauce & Fried Eggs
The steak & sautéed mushrooms were tucked under a sunny side up blanket & we marvelled at how one of the yolks, waiting to burst out, was still intact ! Under the egg was a layer of mushroom and under that we hoped to uncover a big juicy steak. To our surprise the meat was cut into pieces, probably to make it easy to eat. The pieces were a bit chewy but the jus did make our taste buds happy. 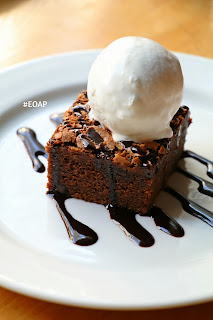 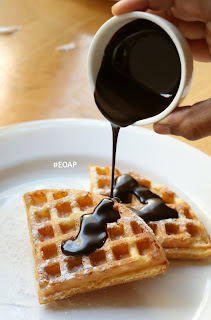 Stout & Chocolate Brownie
A chocolate brownie crowned with a scoop of vanilla ice cream & stout chocolate sauce.
We loved the sauce but the brownie didn’t really hit the cord.

The onset of summer calls for a chilled glass of beer, probably even a pitcher.
We hope you stop and savour the flavours at Brewbot !

Everything on a Plate along with The India Diaries brings to you a special Womans Day contest !* The contest is...

The perfect lover is one who turns into a pizza at 4:00 a.m. – Charles Pierce Who can say no to a pizza party...