posted by admin
259 0 0
Share
How would you spend world Macaron day? Gulping down some delicious Macarons?  Well our little reviewers from Angel Xpress Foundation (AXF) did just that thanks to La Folie Lab in Bandra.
World Macaron Day is celebrated globally on the 20th of March. Created in 2005 in Paris by la Maison Pierre Hermé, on this day, participating bakeries and macaron shops around the world offer customers one free sample macaron. A percentage of all additional macaron sales is donated to a local charity.
Inspired by Jour Du Macaron in Paris, Chef Francois Payard introduced the concept in New York in the year 2010; and slowly the tradition spread across the world.
Chef Sanjana Patel, owner of La Folie Lab, called us ( AXF & EOAP ) to celebrate the day with them.
We asked her why she decided to celebrate World Macaron Day with us? And she replied, ‘I have been celebrating this day for three years. Each year I make sure I celebrate it by making a difference. I celebrated it with Advitya, then Save the Children & now with Angel Xpress Foundation. It’s my way of giving back to the society and bringing a smile on children’s faces.’

Twelve children from the Angel Xpress Foundation walked into the shop, mesmerized.
The kids were very intrigued with the word ‘Macarons’ and couldn’t wait to figure out what they were all about.
As we entered, we were greeted by none other than Chef Sanjana herself. Her warm smile got all the children at ease.
We were first served with some assorted Macarons!
AXF reviewers:
Neil : I liked the fact that they were bite size & in so many colours!
Arun :  They were in so many different colours! I have never had one before. It’s very different from what I have ever eaten.
As the children were divided into four groups, each table was given a beautiful cake tower covered in strawberry pink frosting. 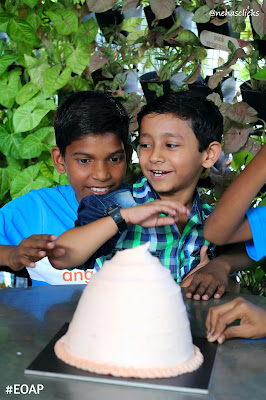 The children almost dove in to the towers until we stopped them to introduce a contest planned by Chef Sanjana. 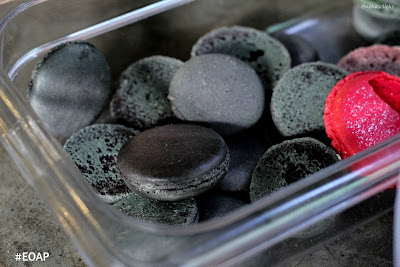 Each group was given different coloured Macaron shells to decorate the tower with, and the best tower decoration would win something exciting!
Our children go to work immediately and were engrossed in making their tower the best.

@angelxpressfoundation decorating their cake towers with #macarons ! Cute Chef Sanjana says hello 🙂 #EOAP @lafoliepatisserie @lafolielab
A video posted by Everything On A Plate (@everythingonaplate) on Mar 20, 2016 at 4:13am PDT 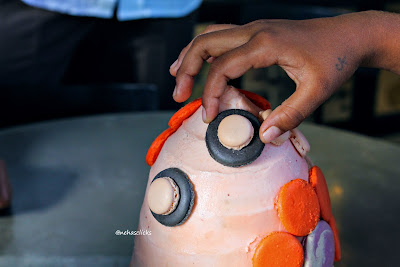 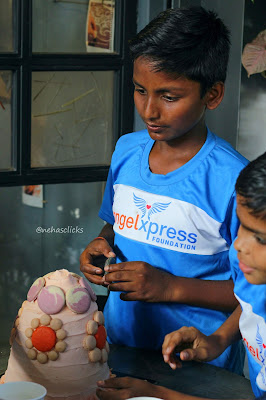 At the end of the competition, the children’s towers looked adorable, each completely different from the other… and they had some interesting names too!
Dil ki Manzil
Kajal : We wanted to add a lot of hearts to the tower and fill it with love!
Phoolon Ka Mehel
Arun  : Our tower is like a garden, full of flowers and nature.
Kingdom of Macrons
Chandini  : Since our tower is full of Macarons, we decided to name it the Kingdom of Macarons. Don’t miss our smiley face on the side! 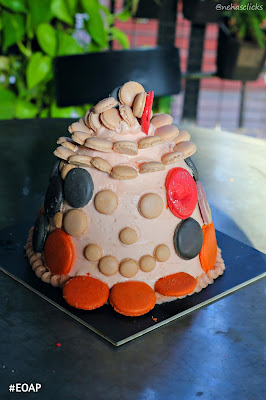 Manzilon ki Seedi
Soni  : If you observe our tower, all around we have Macaron shells that resemble flights of stairs. Every flight of stairs leads to a Manzil or a goal just like Angel Xpress Foundation is a stepping stone for us to reach our goal, happy and successful life.’
Any guess who the winner was? Well, it was Manzilon ki seedi ! Their tower was beautiful and the meaning touched us all. 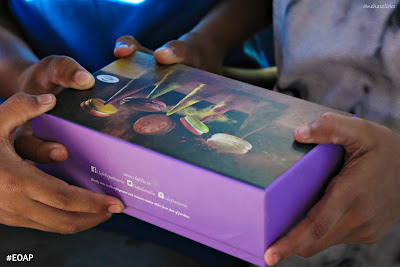 As promised, Chef Sanjana had a special gift for the winners, a delicious box of Candy Macaron (we would be lying if we said we didn’t want to take a bite ! )
As we were wondering what to do with three huge towers of cake, the kids suggested they take it back to the centre and share it with their friends; and La Folie immediately worked on making their wish come true. They began preparing a van to deliver them to our centre in Bandstand.
As we waited for the van to be loaded up, the team served us with a few more surprise’s!
Cake pops 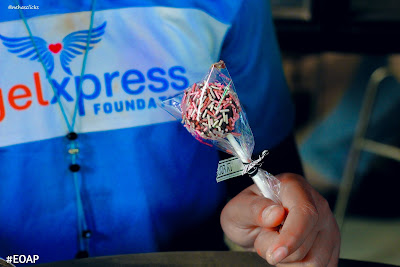 Neil – It’s just like a lollipop, only chocolate & soft! I like these colourful things on it.
EOAP Reviewers : Dark Chocolate cake pops decorated with colourful sprinkles! A perfect choice for the kids. They really enjoyed them.
Opera 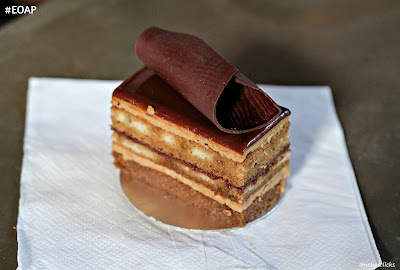 Varun – It tastes like chocolate coffee. I like how soft it is! Even the chocolate rolled on top was fun. I liked this the most.
EOAP Reviewers : The delicious cake was soaked in coffee with a hint of almond amidst the layers of sponge cake, ganache & butter-cream. The Chocolate glaze that covered the cake had an asymmetrical chocolate cigarello rolled on top.
Paris brest Gateaux
with butter-cream Profiteroles 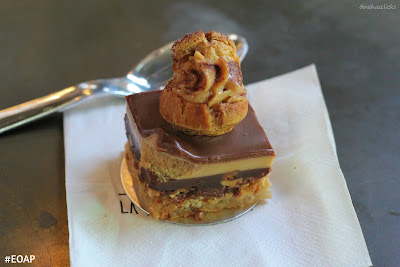 Kajal – This was a buttery tasting cake, something like butterscotch with tiny tiny pieces of nuts in it. I liked the hat like thing on top of my cake! The cake was nice and creamy.
EOAP Reviewers : Praline Flavoured cream, bits of Hazelnut with a delicious butter-cream profiterole sitting on top. This one was a hit!
After gobbling down their treats, we headed back to the AXF centre where the kids shared their experience at La Folie and the yummy cakes they had decorated.
AXF reviewers :
Neil : So many treats! It was super tasty. I had fun decorating my cake, and the didi’s & bhaiyyas there were very nice. I liked the plants around.
Chandini  :  I have never experienced anything like these cakes before. The names were too confusing but taste wise they were awesome. I hope we get to visit again. I wonder if they serve something apart from sweets too! I would love to try it.
EOAP Reviewers : It was a pleasure to see the children eat all the goodies they could. Everyone on the team had a wide smile throughout that made the children very comfortable. The dessert served were delicious and even we wished we could have more! Thank you Chef Sanjana & Team La Folie for the wonderful experience. We hope to meet you again soon!
And a thank you from the little ones at the center too 🙂 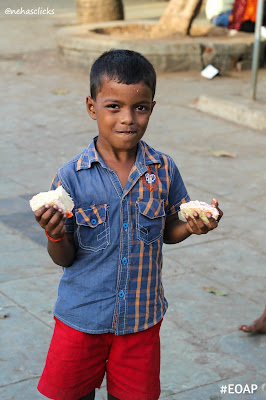