posted by admin
192 0 0
Share
Valentine Dessert Crawl Lower Parel ( Part 2/2 )
BBC ( British Brewing Co.) was where we were headed next & on our way there we decided to take one last chance with Movenpick. 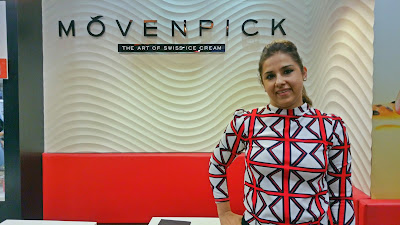 We met the owner, Pooja Advani, who served us our pancakes. 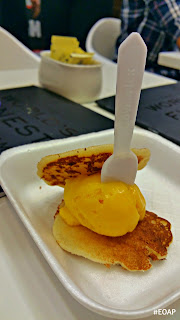 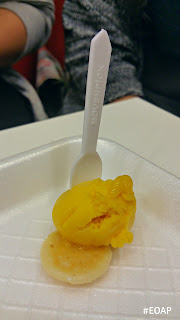 The size of the pancakes had not only increased but they served two now, we finally got to taste the pancake.


It was great to see the owner take charge of the situation and
mingle with the crawlers as well. 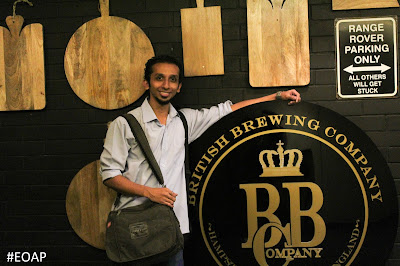 BBC gave us choice between a dessert with egg in it (Queen of Pudding) and an egg-less dessert (Strawberry Panna Cotta) . 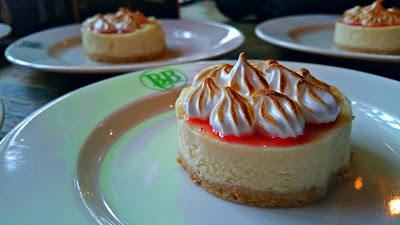 The Queen of Pudding had a delicious torched meringue crown with a jam right underneath it along with a crumb base. The pudding was basically a bread milk pudding which Over was delightful & heavy. 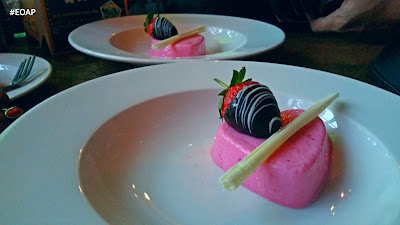 The Strawberry Panna Cotta was a good egg-less option to serve. It was topped with a Chocolate dipped tangy strawberry and a milk chocolate cigarello. The panna cotta was sweet and well set. Overall it was a good dessert but with a drizzle of strawberry compote would have made this dessert a winner.

Aldrich Fernandes – ‘ I liked the desserts here. Preferred the Pudding to the Panna cotta.’

The last stop before we dug into some spice to get our levels back to normal was Mighty Small. 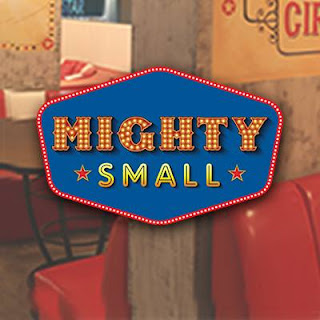 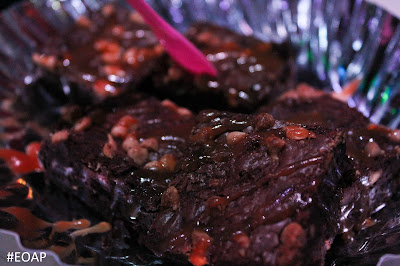 The dessert we were served here was the Salted Caramel Brownie.
We thought, eh…brownie…ok;
but as we took that first bite , wow.
A warm, simple, soft, gooey brownie filled with chocolate chips and drenched in caramel and still not overly sweet! Wow. We got them fresh out of the oven and we couldn’t get enough of them. 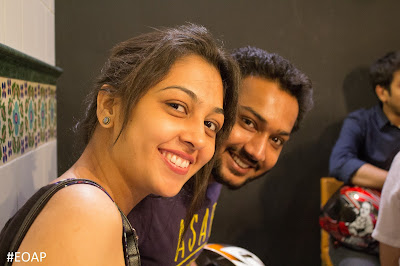 Fatema Dhansura – ” This was the BEST dessert of the lot,
the perfect way to end the crawl ! “
Mustansir Gilitwala – ” Hands down the best dessert of the crawl today! I loved it, warm and absolutely delicious. “
Our Feedback on the event
Team #EOAP – ‘ The Lower Parel crawl was good. Team Time out (on ground) was very helpful. They heard us out and got our complaints worked upon immediately. The desserts were pretty good, but it was slightly chaotic and it seemed like some of the outlets weren’t well prepared or well briefed.
Over all we will give this crawl a 3/5. ‘
Feed back from other crawlers:
Nishant Patade ( Ship Navigator ) – ‘ I liked Zen Cafe the most taking into account the ambiance, service & desserts as well as the fact that they delivered exactly what they promised. My favorite desserts in the Crawl were the Gadbad Shetty & the Rouge Velour. The event was a good way to kill a Sunday with friends, but if i wanted to this this on my own, i would have never done it. Too chaotic to even strike a conversation with another crawler, it seemed like the event was just about getting registered & the team was done. ‘
Mustansir Gilitwala ( Partner at a Chartered Accountant Firm ) – ‘ The best dessert for me was at the end of the walk, the one at Mighty Small. It was light and not too sweet. I also enjoyed the Chocolate Hazelnut Ganache at Zen Cafe. I loved the crawl thanks to the awesome company I had. A great valentines. ‘
Bosky Dhirai ( Copy & Content Writer ) – ‘ The experience was something different. I honestly hated the first outlet in Palladium, the pancakes were like a bad joke. I would like to go for such crawls but with friends, not something i would do alone, there isn’t any interaction except registration. But I spent my valentines day well with a bunch of friends, so i am happy.’
Deepak Krishnamurthi ( Tax Senior ) – ‘ This was definitely a different experience, not something i would usually do. I wouldn’t ever do with without friends though. If you want to go for a crawl like this i suggest you be prepared for a major sugar rush and a want to skip the next meal. I was completely full by the 2nd last dessert wanting out. My favorite dessert was the Gadbad Shetty, it brought back a nostalgic flavour. Over all i guess it was ok. ‘
Devashree Shetye ( Event Planner ) – ‘ I loved the Gadbad Shetty at Palladium Social ! Simple & sweet, ice creams tasted amazing. Overall the crawl was good, locations were good too. I had a good Valentines with friends. ‘
Aditya Raje ( Student pursuing finance ) – ‘ My favourite place was the British Brewing Company. It was well organised and they made sure that there wasn’t too much of a crowd there, not to forget the dessert was amazing. The dessert crawl was alright, except for some places like Movenpick which was a huge disappointment. ‘
Snehal Chordiya ( Business Development Manager ) – ‘ I loved the ( Belgian / Dutch ) Chocolate Pastry & my least favorite were the pancakes. The Crawl had good desserts but there was too much of chocolate, it would have been way better with some variations, something Indian maybe? ‘
Abhilash Pillai ( Banking ) – ‘ Zen cafe’s desserts were hands down my favorite! Both their desserts were better in portion and taste. Overall experience was… well… alright, Just 3 out of the 7 places were good to be honest. ‘
Neha Jadhav ( Student ) – ‘ My favorite desserts were the ones at Zen Cafe & the Rolling Pin. I loved the Ganache but it was a bit too frozen for me, a little softer would have been perfect ! I think it was a fun event & more than worth Rs.250 ! Sadly, we got our tickets late ( boo!) This was more like a dessert Treasure hunt ! Lets just say, I would love to play it again if they do it next year. ‘
Aldrich Fernandes ( Project Engineer ) –  ‘ My favorite dessert of the crawl was the Tiramisu at Zen Cafe. Not only was the taste awesome but it just melted in my mouth! I was simply craving for more. I was honestly disappointed with the size of the desserts served at Movenpick and also the lack of waffles. Overall the event wasn’t bad but definitely needs some improvements. ‘
Sneha Das – ‘THIS was my Valentine’s Day gift and I couldn’t be happier!! 😀 I have a MAJOR sweet tooth (cant help it being a Bengali!) and the BEST part – the Crawl had places listed like Le Folie and Palladium Social that I have been wanting go since ages!! So, thank you DessertCrawl organisers for such a sweet deal!! (Pun intended :-p)
Our first stop was Rolling Pin – and boy was I IMPRESSED! So impressed that I went the next day -again – to get my sugar dose! 😛
On the day of the Crawl we were offered the Chocolate Truffle Pastry. Being a 100% veg restaurant it was a pleasant surprise that the pastry had no egg – yet so moist and fluffy!!
Overall, I absolutely loved the chocolate treat, enjoyed the rustic ambiance and highly appreciated the well trained staff – who were not only patient with the over whelming crowd but were happily answering customer queries.
As a tip to the sugar monsters who would want to participate in such future Crawls, make sure you enjoy this experience along with friends and family – the bigger the group the better, make a day out of it! And for the ones who don’t have a group or are alone – don’t worry!! because you will make tons of amazing new friends!!
As the wonderful Julia Child once said, “A party without cake is just a meeting” – this DessertCrawl was one hell of a good party ! ‘ 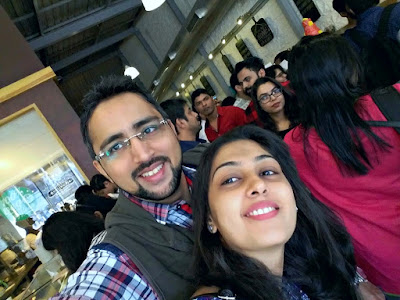 Fatema & Abdeali Kanchwala ( The very much in love couple celebrating Valentines ) – ‘ DESSERT CRAWL…yeh yeh…haha…Well !!! On a warm Sunday afternoon…with my Valentine… I went for this clueless dessert feast which turned out to be an enjoyable evening nonetheless accompanied with a bunch of energetic friend’s friends.
It started with ROLLING PIN with a small cake which rolled down swiftly in our gullet…We than moved to the opposite side of the road..with a warm welcome from the host of ZEN CAFE…after getting comfy on the sofas..we were presented with a pastry, Chocolate Hazelnut Ganache, which reminded me the laws of geometry..it was a quadrant of 25 degree to be precise…if I am not mistaken..I would rather say the complimentary yogurt was a blessing.
After that we crawled our way to palladium 3rd level..MOVENPICK..it was a coin size Swiss ice cream and so called pancakes…and as our friend, Mustan, rightly said..we could just breathe it in by mistake!… Luckily without any crawling…on the same floor LA FOLIE was a sigh of relief…the Rouge Velour and Eclair was soothing to the taste buds…
By this time we were really done with the sweet tooth…but as Neha said…you can’t waste things you have paid for…
Right opposite we moved to SOCIALS…rather than praising the Tutti Frutti Amul ice cream..we all enjoyed the music..
Locating the 4th floor of palladium, we went to BBC…Here we were given option of a Strawberry Panna Cotta and a Queen of Pudding…both were heavy! But another crawler, Aldrich, came to our rescue and gobbled it all..!
Moving to our final destination MIGHTY SMALL at SMAASH…we were exposed to some nice chocolate Brownie…but sorry to say..it was too late.. by that time we were done with the desserts….! ‘

Sadly, the Powai Dessert Crawl was an absolute put off for our other Team. The Chef & the food critic from our Team were absolutely furious! What happened? Keep checking our page to know more.

For more pics of the event : https://goo.gl/KQRszp

” So often these days eating Indian food passes for spirituality. I don’t meditate, I don’t pray,...